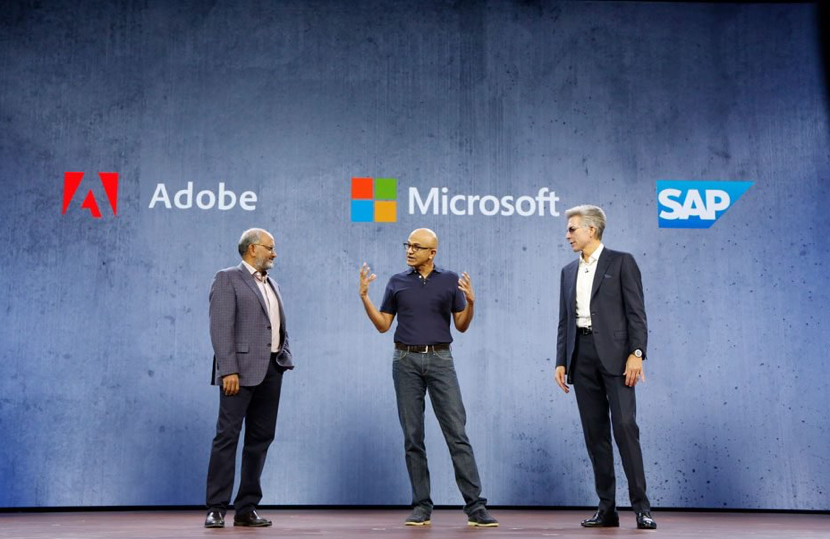 Shantanu Narayen, CEO, Adobe; Satya Nadella, CEO, Microsoft; and Bill McDermott CEO, SAP, at Microsoft Ignite 2018
©2018 Microsoft
At Microsoft Ignite 2018, a reported crowd of 26,000 attendees converged in Orlando, Florida to hear the latest updates from the Redmond-based tech giant, and Microsoft was ready to deliver with five major announcements related to security, artificial Intelligence (AI), a new development platform to assist in workforce productivity with Cortana, new Internet of things (IoT) and edge computing products, and the much buzzed-about Open Data Initiative with Adobe and SAP.

It's no surprise that cybersecurity tops the list of announcements coming out of Ignite 2018. In fact, Microsoft's Corporate Vice President of Security Rob Lefferts declared the end of passwords altogether. At the event, Microsoft announced a passwordless sign-in to Azure Active Directory-connected apps (which include Office 365) via Microsoft Authenticator. Essentially, the Authenticator app uses a multi-factor authentication combining your phone and your fingerprint, face, or PIN—moving user experiences closer to a passwordless reality.
Microsoft also rolled out plans to extend their Office 365 Secure Score, an enterprise-grade report card for assessing an organization's cybersecurity posture, to include all of Microsoft 365 (including Windows and Microsoft Intune), rebranded as Microsoft Secure Score. They also announced the addition of this offering in the Azure Security Center for managing hybrid cloud workloads. Lastly, Microsoft launched their new integrated interface within the Microsoft 365 admin console, called Microsoft Threat Protection, which brings together their various security products in one single dashboard for easy detection and remediation across endpoints, identity and access management, and an overall view of the security landscape.

Like many others, Microsoft remains committed to advancing their internal AI initiatives, announcing a collection of new AI and data products. At Ignite, they unveiled automated machine learning capabilities for its Azure Machine Learning service, a feature that automates the complex process of creating, testing, and modifying machine learning models, positioning it as a way to make deep learning more accessible to a larger set of the workforce. Additionally, they also announced new AI-powered tools in Microsoft 365, including a unified search experience that enables employees to search across their organization’s entire network of data. Especially of note, a new feature called Ideas consolidates the platforms's AI capabilities within PowerPoint, Excel, and Word throughout the document creation process. This feature basically recommends intelligent suggestions based on context of the document as users work within these apps.

Microsoft continues to dedicate resources for advancing Cortana, its digital assistant, within enterprise environments to support business-related tasks, though their leadership team maintains they are still committed to the digital assistant for consumer use as well. At the event, Microsoft announced the addition of Cortana Skills Kit for Enterprise, which is currently available by invitation only. Ushering in a new era of voice interaction with systems, this new kit is said to allow enterprises to initiate company-specific tasks through the use of voice and natural language interfaces. This latest move by Microsoft illustrates an increasing focus on simplifying employee workflows and initiating business processes that allow the workforce “to stay in the flow of what they are doing," according to Javier Soltero, Microsoft’s Corporate Vice President of Cortana. Across the board, we expect to see this trend in many other vendor solutions outside of Microsoft as well. The Cortana Skills Kit for Enterprise is powered by the Azure Bot and uses natural language understanding from Azure Cognitive Services.

4. Internet of Things and Edge Computing

Within this space, Microsoft announced several enhancements and new capabilities around their cloud computing platform Azure, including Blob Storage services that enable users to locally store and access data on an edge device, new capabilities for provisioning devices in IoT applications, IoT platform support to turn Android and Android Things into IoT devices, extended offline support for edge devices and edge gateways, and the addition of Azure Digital Twins.
Perhaps the most significant IoT-focused announcement coming out of Ignite, Digital Twins opens the door for businesses to create digital models of any physical environment, including people, places, and things, and the relationships and processes related to them. Once that digital model is in place, Azure IoT Hub connects the IoT devices and sensors that keep the digital model up to date with the physical world. Azure Digital Twins also integrates with Azure data and analytics services, which allows users to track past performance and predict the future of their digital model. It's clear that Microsoft is going all in on IoT, with their announcement last Spring of investing over $5 billion over the next four years in this technology. Azure Digital Twins became publicly available on October 15.

Lastly, we touch on the major announcement that created lots of excitement across the industry, as leaders from Adobe, Microsoft, and SAP took the stage in Orlando to introduce the Open Data Initiative, a partnership meant to empower a new generation of customer experiences. Leveraging a common approach and set of resources for customers, the Open Data Initiative essentially gives each organization:
Coming together for the first time, the three tech leaders hope to eliminate data silos and enable a single view of the customer, enhancing interoperability and data exchange between their applications and platforms using a common data lake service on Microsoft Azure. The hope is that companies can better govern their data and support their privacy and security initiatives. Noticeably absent from the partnership are Salesforce and Oracle.

As of late, Microsoft has sharpened its focus on business applications and ease-of-use for their technology. Better connection of data across an organization enables companies to more easily use AI and advanced analytics for real-time insights, populate business applications with critical data, and provide AI-powered services for customers. These announcements send a clear message that Microsoft is truly looking to the future, is working to eliminate user complexities, and is taking a lead position in bringing the world closer together through technology.
Bob Larrivee is a recognized expert in the application of advanced technologies and process improvement to solve business problems and enhance business operations. He reports on the latest information management technologies for DOCUMENT Strategy. Follow him on Twitter @BobLarrivee or visit boblarriveeconsulting.com.